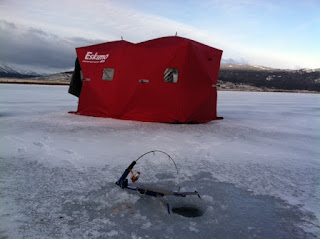 There are quite a few different "Tip-up" and "Hook-set" set ups for ice fishing these days.  One comment I recently saw someone make on a discussion board about legalizing the use of devices in Minnesota such as the JawJacker was this, "Don't we have enough electronics already? Does someone really need more to catch fish? Remember, it's fishing not catching!!! If they do pass it I wont use it but if someone wants to then fine but I would say no." - Doug.

My post is not to necessarily argue with Doug making this comment but rather point out some misconceptions that many people (such as Doug) may have and give some reasoning and benefits of using the JawJacker. 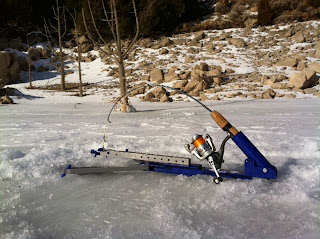 Misconception #1 "Electronics"
Well the JawJacker, along with all of the other devices of this kind, are not electronic at all.  It is unfortunate that those who are "against" using these devices are under the misconception that the devices are electronic and some how give the fisherman an some unfair advantage by being electronic.  The truth is that the JawJacker is a device that is powered solely by the ice fishing rod that you put in it. 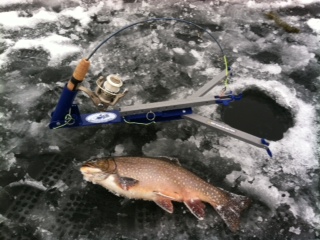 Misconception #2 "Spring Loaded"
Even though there may be a spring on the trigger adjustment of the JawJacker to adjust the tension of the trigger mechanism, the spring does absolutely nothing other than adjust how sensitive the device is set.  There is no spring loading in the way the device sets the hook or in the way the device is held in the ready position.  The JawJacker relies primarily on the tension of the rod itself to set the hook which can be adjusted to match the fish you are attempting to catch.  The angle of the rod in the rod holder as well as the length of the trigger arm will fluctuate the momentum of the rod from an extremely light hook set to a harder hook set for bigger fish.  To demonstrate how these devices work please watch the video provided by Matt from JawJacker!


Misconception #3 "Fishing not Catching"
One thing I am a huge believer in is that this device does EXACTLY what it says it will do!  I have never used a product in fishing that is more spot on with what it promises to its consumer!   The JawJacker website state, "The JawJacker is a new ice fishing device that is designed to help ice fishermen catch more fish. When a fish bites, the trigger releases the bent fishing rod so it can snap up and set the hook.  The trigger is very sensitive and can detect light bites."  There is also a slogan that JawJacker stands by which says that this device "Makes good ice-fisherman better" which is exactly what this product does.  It is important to point out that this device is not 100% guaranteed that you will catch a fish.  There are times that this device is set off while missing the fish, why it's still called fishing not catching!  There are lots of tips to up your hook-up percentage with the JawJacker but even with these tips nothing is 100%.  So this device does not make ice fishing into fish-catching.  It is also obvious that you need to be where the fish are to catch fish as well as use the bait the fish are biting on.   The misconception that the Jawjacker will take the sport out of it is simply just not true.

Lastly I just want to say that no one I have visited with, chatted to, or tried to convince about the JawJacker has really been completely 100% sold on it until they have seen them in action (either in person or on YouTube)!  I have been ice fishing numerous times this year where I have had people come over to our group to see "what we were doing different" or "what all the excitement was about".  The answer to their question is quickly given to them as they watch the JawJacker in action!


Check out how much fun this kid has catching fish on the JawJacker!

As many times as I have been out ice fishing I still get the rush when the JawJacker goes off, but nothing to me is as exciting or fulfilling as when I take a few "first timers" or a few kids up ice fishing with the JawJacker!  Watching kids run from pole to pole as they go off with a school of hungry fish swimming through is irreplaceable!  As I said earlier that the biggest selling point is watching these in action so I want to not only show you a video of the JawJacker in action but also a way to get entered to win yourself a JawJacker!!! That's right, here is your post-Christmas present from JawJacker!

To get entered just follow the instructions on the Rafflecopter below and be sure to share the word so that we know you like what we are doing!  Good Luck!

a Rafflecopter giveaway
Posted by Idaho Pursuit at 8:09 PM