Recently I read an article about a "Famous Wolf" which had been shot just outside of Yellowstone National Park in Wyoming.  This wolf is apparently very well known and almost a celebrity to outdoor photographers and some wildlife enthusiasts.  I do not want to be insensitive to those who make a living photographing Yellowstone's wildlife, yet I do wish to voice my own opinions about this situation.

As the article states, "According to National Park Service estimates, there are more than 1,700 wolves living in the Rocky Mountain region—most in Idaho".  There is no doubt that the wolf number in this area is not suffering tremendously as some may assume.  According to another article I recently read, the state of Idaho is only roughly 100,000 elk.  There is a lot of debate on how many elk are necessary to sustain a pack of wolves every year, and to be honest I do not think that there is one single correct answer to that question.  However, I do know that the reason Idaho, Wyoming, Montana, and other states have began to allow wolves to be hunted is for wildlife management.  The law of nature works by a supply and demand principle and when the the supply is lower than the demand, wolves will be looking for other ways to get their necessities for food.

In the area I live in Idaho, I am fairly close to the border of Yellowstone National park.  My whole life growing up hunting, I was always aware of the boarder to the park and the hunting restrictions in those areas.  Yellowstone is not a zoo, and the animals are wild, thus they roam freely entering and exiting the park as they wish.  I can't tell you how many times we have been close to the boarder of the park and the elk know where they are safe, and where they have pressure from hunters and/or hikers.  These animals are quite intelligent and know when they are safe.  Since this incident with the "famous wolf" being legally taken just outside of the park, Wyoming has now restricted hunting beyond the park boundaries to include a safe zone just outside of the park ON PUBLIC LAND.  I do not feel that this will protect these animals any more than they already are, nor do I feel that this is right to restrict the hunters more than they already are concerning the size of the park compared to their hunting area.
If the agencies in charge of managing the number of wild life in these areas feel that it is not only okay but also necessary to allow hunting of the wolves, I do not feel that there needs to be any more restrictions than those imposed by that management agency.  The sad part about this situation is that if the hunter had taken any other wolf in this pack, there would not be as big of a push to restrict the wolf hunting in these areas.  Just because this wolf is viewed as "famous" there is an issue.

I do not expect everyone to see a problem with this like I do, but I do feel that I needed to at least voice my opinion on the matter.  These wolves are multiplying quite rapidly and there are management strategies in place to keep them controlled and healthy.  I don't know many people who would rather see a wolf starve to death over one taken legally by a hunter.  If those outside of these areas wish to see wolves wander freely, I suggest a reintroduction of wolves in Central Park and other areas where wolves once roamed.


Here is the other article mentioning how Montana has restricted hunting near the boarder of the park.

One reason I enjoy ice fishing as much as I do is because I believe that "... all things denote there is a God; yea, even the earth, and all things that are upon the face of it..." (Alma 30:44)

I know this was a short post, but I just felt like sharing a few pictures and stating ONE reason I enjoy ice fishing as much as I do... This is how I view heaven (maybe just a touch warmer)!
Posted by Idaho Pursuit at 7:41 PM 2 comments: 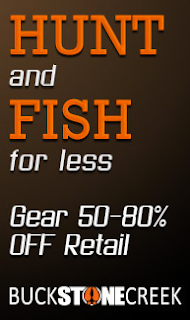 With Christmas approaching, everyone is always looking for the best deals.  This is especially true when it comes to hunting and fishing equipment! When I ask my friends or family what they want for Christmas I often hear things such as, "You can never have too much camo" or "Just get me something for hunting or fishing and I'll be happy".  This is great for me when it comes to holiday shopping  because I can usually get it all done in one spot.  The only problem I run into is not being able to fit all of these outdoorsy gifts into my budget!

Luckily, there is a place I can go to get these gifts at a HUGE discount! Buck Stone Creek is a private website which offers amazing deals on the gear you normally use! On this site, you can find brands such as SOG Knives, Gorilla Tree Stand Gear, Brunton, Toad-A-Flage Camo, Muzzy, Vanguard, Scent-Lock, Tool Logic, and more!  The best part about the site is that these brands are usually offered at an amazing discounted price such as 50-80% off!  This is awesome for a guy like me who has a huge love for the outdoors as well as sharing this passion with all my friends and family.  This means that my pay check can go further when getting the necessary equipment I need to maintain my passion.


This site is one of a kind and is definitely worth checking out. The way the site operates is that you have to register in order to see the deals they offer.  This is the only way they are able to offer such unreal deals on the equipment you normally buy for double the price.  They offer a few products at a time in a "flash sale" style which allows them to coordinate these sales with their retail providers and to ensure the customer that they are offering the best deal possible.  These sales are only available for a limited time so it is important that you keep up on their sales to make sure you don't miss out.  Because the guys over at Buck Stone Creek are wanting to make sure they are offering the best deals available, they have agreed to give an additional 10% off your first purchase on already discounted items for all those who click the Buck Stone Creek icon on the side of my blog and use the promo code "idahopursuit" in the promo code box when completing their checkout!

So, the bottom line is that if you are going to buy gear for the outdoors, why wouldn't you do so at half the price?  It seems a little odd to go out and attempt to "out smart" an animal while hunting if we aren't smart enough to survive in the world we live in.  Why make our passion any harder to live by spending double the price for the gear you could get from our friends at Buck Stone Creek for a discounted price? I don't think I'm the only one who feels this way, so please click their link on the side of my blog, get registered, and be sure to use "idahopursuit" in the promo code box to get an additional 10% of your first purchase on amazingly discounted hunting/fishing gear!
Posted by Idaho Pursuit at 6:09 AM No comments:

When I go fishing, I often have the perspective that I am there for the quality instead of quantity.... In other words, I would rather catch one big fish than fifty tiny fish.  I feel that catching "the big one" or a fish that is unique in some way is much more worth it than catching numerous small fish.  Don't get me wrong, this is not to say that I do not enjoy getting out and catching fish of all shapes and sizes, I am just stating what goes on in my head (usually while I'm sitting there watching everyone around me catch fish and me doing nothing but sitting there thinking...)  I would much rather catch a few small fish than no fish at all!

I have fished enough in my area to know what works in the different bodies of water I fish in.  I am sure there are things that work that I am not aware of, but I have my own "traditions" you might say that I use religiously for bait.  I have caught quite a few big fish of many different species and feel that I will have to get pretty lucky if I am going to out do my own records on some species.  Here in Idaho, I am able to ice fish with up to 5 poles at a time which allows me to use what I know works, as well as take the time to try something new to see if it works any better.  Recently, I have been visiting with the Matt who designed the JawJacker and one tip he suggested, is to use a smaller bait to get more hook ups.  I will admit, I thought to myself that I may be able to catch more fish if I go to a smaller bait, but I will not catch as many big fish by doing this.  I went fishing a few times this year, and what I have always used seemed to be working just fine so I didn't think twice about changing things up.


This last Saturday however, I was ice fishing and wasn't having as good as luck as I had been hoping for.  It had been about an hour and I had only caught a few small fish.  By this point I thought, I might as well try using smaller bait to see what happens.   I decided to use a few jigs Matt had told me to use, and tipped them with half of  meal worm.  I was quite skeptical putting such a small jig and bait down the hole while my other poles were baited up with much larger baits.  I set it all up in my JawJacker with the bait a few feet off the bottom and walked away.  By the time I got to my seat and sat down my JawJacker went off!  My first thought was that I had failed to set it up right and the JawJacker had gone off due to some mistake on my part, but when I looked at the pole I could see that the only mistake was that I hadn't listened to this advice sooner! My pole tip was bending with the fight of a decent sized Cut Throat Trout who thought my bait was just to much to resist! I pulled in the fish and in this picture you can see the jig I caught it with.

After this experience, I will admit,  I ended up changing 3 of my 5 poles to have similar bait.  I started catching quite a few fish and ended the day by pulling 24 onto the ice.  I did catch a few on the bait that have always had good luck with, but I was surprised at how many decent size trout I caught on such small bait.  So next time you are sitting there on the ice not catching anything, maybe try switching your bait around and maybe even downsizing your bait to see if that helps.  This may be a tip that many people already know or talk about, but it was new to me and thought I would pass it on to anyone who may be interested.