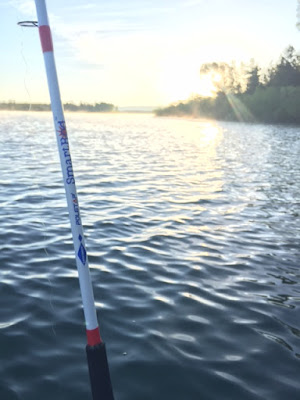 Every once and a while I see a product online that makes me curious enough to give it a shot.  This I exactly what happened with the Smart Rod by TackoBox!

This fishing pole is unlike any other fishing pole on the market today.  What sets this rod apart from all of the others is it’s advanced technology built into the rod which senses the bite of the fish and sounds an alarm!  I know some of you are already wondering why in the world would you need/want a rod that sounds an alarm when the fish bites… Let me give you my take on this rod to help you understand why I think the Smart Rod is a great addition to any fisherman’s arsenal!!!

First let me tell you a little about the rod itself:
The Smart Rod comes in either 6’6” or 7’ length and in two different styles: Spinning rod, or Spin cast rod.  The technology in the Smart Rod is referred to as Poletap which is a “Computer Controlled Accelerometer Technology."  The rod has three different sensitivity levels: High, Medium, and Low which allows you to adjust it to your conditions according to the weather, as well as for the fish you are after.  The alarm on the rod is not obnoxiously loud and also has three LED lights that go off when the fish bites!  The rod only cost $39.44 from Walmart.com and can be shipped to your local Walmart for free.  At that price the Smart Rod is not too expensive to give it a shot and see how you like it.  I will even say that I have used the Smart Rod as just a regular fishing pole while spinner fishing and I love the way it casts.  I would much rather buy a rod like this than some of the other rods at Walmart for the same price, which fail to perform as well.

Now I’ll get into why I feel you should give this rod a try.

Here in Idaho you can use two fishing rods if you purchase the “Two Pole Permit” which is only $13.75.  That is worth it to me to double my chances of catching fish.  So… When using two rods, the Smart Rod is an awesome second rod that you can cast out and let sit while either throwing a lure or some other type of spin cast bait.  Using the Smart Rod allows you to completely focus on your lure fishing until you hear the alarm of the Smart Rod letting you know you have a bite on your other pole!  I also love being able to bait up the Smart Rod, cast it out, and then spend time rigging up my other rod without having to worry about a fish pulling my rod in while I’m not looking!

The first time I used the Smart Rod, I was fishing by a local bridge and the fish weren’t really biting very well.  I fished for about 45 minutes and had one bite on my other rod but the fish didn’t take the bait… I decided to spread my rods out to cover more water so I took the Smart Rod to the other side of the bridge, cast it out, activated the alarm, and then re-baited my other rod.  Just as I was finishing re-baiting my other rod, I heard the Smart Rod alarm going off!!! I hurried and set my other pole down and ran over to the Smart Rod to see that I had a fish on! If it wasn’t for the Smart Rod, the fish could have swam around and gotten off or it could have even pulled my pole in before I got around to checking on it! 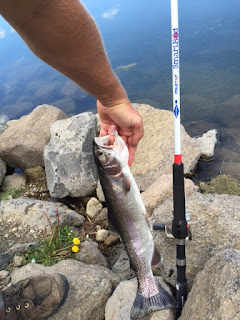 After that experience, I knew the Smart Rod worked well on some decent sized trout. The second time I used it, I sought out to catch a few small brookies out of a local stream.  I loved how sensitive the rod is, especially on a nice calm day.  The rod worked exactly as expected and sensed even the lightest bite from a small brook trout.  I will say though, for creek fishing like this, I rarely ever use a second pole so my justification for using the smart rod in a situation like creek fishing is if the fishing is slow, you can cast out your bait and let it sit rather than losing patience and giving up. 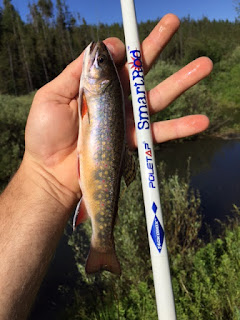 I kept trying to get the Smart Rod on camera in action but every time I had a camera going, the fish wouldn’t cooperate.  Luckily, I went out one morning with my wife and got lucky enough to get one on camera.  I was fishing on Henry’s Lake in my canoe.  If you look close enough you can see the tip of my rod bounce just a tiny bit when the alarm sounds.  This fish bit very softly, taking a dead minnow I had on it for bait.  In the video, ignore me talking about how the rod shuts off while reeling in… It does shut off when you reel in but I wasn’t reeling in consistently and long enough to have it shut off.  :)  I reel a couple cranks, rest, then start again…

I went out another time to keep testing the rod, this time I was intentionally fishing in some “less than perfect” weather conditions to give the rod a good review.  As I predicted, on the high sensitivity level the rod kept moving just enough to set off the alarm.  The solution to this problem is simple--All I had to do was push a button to adjust the sensitivity to medium, and the alarm stopped giving me false hope.  As any fisherman knows, fishing in windy conditions for finicky or light biting fish can be frustrating.  Likewise, when using the Smart Rod set on a less sensitive setting, it will not always catch the light bite of a fish.  The difference in the sensitivity levels allowed me to also test out the rod while trolling in my canoe. I was able to troll while on the medium or low setting without false alarms, but never got a bite during that time.

Yes, the rod works as described.  Yes, it is simple to use and simple to understand.  Yes, not every fisherman wants/needs this rod.  Yes, I believe that it brings some extra excitement to catching fish.  Yes, I feel this rod would be great for a second rod, a kids first rod, a grandpa’s fishing rod, or for anyone who just enjoys the idea.  I know my nephews LOVE my "fishing pole that has the alarm."  This brings such a fun dynamic to fishing with kids!!! I am not saying that every fisherman needs this rod, but I am saying that it is a fun rod that any fisherman would enjoy having in their arsenal.  I enjoyed using this one so much, I even went out and bought my dad one for Father’s Day because I knew he would love it!

When talking to TackoBox, they informed me that they are in the process of building crappie rods, kids rods, as well as ice fishing rod!  The last one makes me SUPER EXCITED!!! 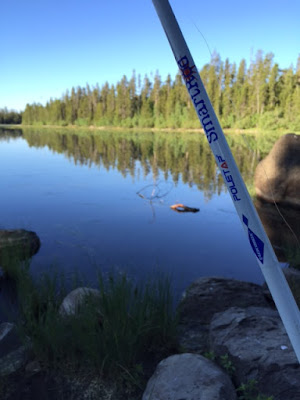 I am very excited and anticipating when they are able to market the ice fishing rods because here in Idaho you can fish with 5 rods, use tip up (JawJackers of course!), as well as fish both day and night! This will take my ice fishing game to a whole new level, I can’t wait to have my five JawJackers set up with a Smart Rod ice rod and sit back and wait for the alarm to get my heart pumping! Also fishing for ling (burbot) at night with the LED’s on the smart rod will allow me to locate which JawJacker has a fish more easily!  The Smart Rod really is the first step in blending technology with fishing rods.  I am definitely excited to use the Smart Rod this summer as well as while ice fishing this winter!  I can confidently say that if you at least give the Smart Rod a shot, you won’t be disappointed.  I know some of you still feel that this isn’t for you or isn’t necessary, but when you get it and catch a fish on it, you won’t be disappointed!
Posted by Idaho Pursuit at 7:15 PM No comments: