Sturgeon Through The Ice!!! 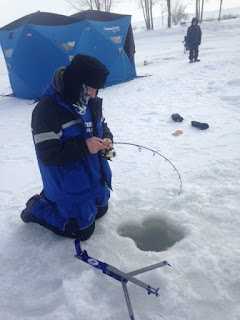 As many of you know, I am an avid ice fisherman.  I would go as far as saying I'm borderline obsessed with it.  Most people look forward to the summer/spring so they can get out of the house and explore the mountains, while I'm constantly watching the thermometer hoping for below freezing temperatures.  I have caught a number of large fish through the ice, and have caught a hand full of different species while ice fishing, but I recently had an opportunity which has never even crossed my mind.  Ice fish for sturgeon here in Idaho! Yes, you read that right... I had the opportunity to pull a sturgeon through the ice here in Idaho ON AN ICE FISHING ROD!!! 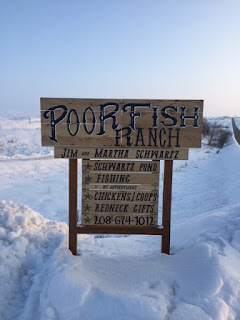 The Idaho Statesman posted an article on January 9th 2017 of a man in Parma Idaho who has a private pond stocked full of sturgeon and other fish.  After reading the article and watching the video on the post, I knew that I had to take advantage of the opportunity! From my home, Parma is close to a 6 hour drive across the state.  My buddy Lucas from work, who showed me the Idaho Statesman article told me that he wanted to go and that we could made a day trip out of it if we were dedicated enough.  We decided to plan on our next day off work to make the 6 hour drive, fish for 9 hours, and then drive back.  As crazy as that sounded to me, I am always focused on being with my family and being home with my kids, so I was all for making the sacrifice of sleep to make this trip a reality without being gone from my family any more than I had to be. 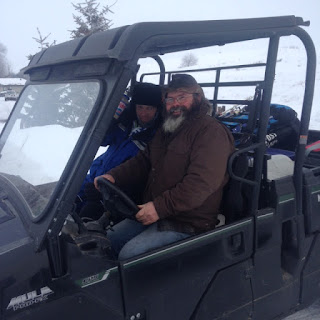 When January 16th arrived, my alarm sounded off at 2:00 AM.... I gathered my things and hit the road to my buddy Lucas' house.  When I arrived, we packed my gear into his vehicle and we headed toward Parma with high hopes of landing a fish we never thought would be a possibility for through the ice.  After the 5+ hour drive we arrived at the Poor Fish Ranch owned by Jim Schwartz.  Jim set us up with bait, tackle (including barbless hooks of course), and all of the info we needed to be successful on his pond.  We talked about how sturgeon have no bones or teeth and how we need to be super careful as far as how we handled them.  We had to drill at least 4 holes which all connected to each other in order to have a hole large enough to get the fish through the ice.

As we started fishing, it wasn't long before we had a bite or two.  The Sturgeon were lightly biting and we had to be paying attention or they would just suck the bait off the hook and move on.  It wasn't long before we had our first sturgeon on the ice! Lucas' kids pulled a few smaller (20"+) sturgeon in, and then one of his sons ended up hooking a pretty good one! The fight lasted a good 8 minutes before we were able to pull a nice 3+ footer through the ice. 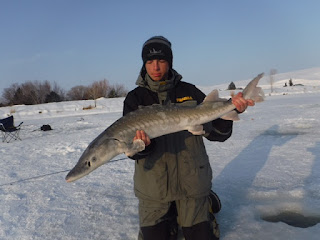 We kept fishing, pulling an occasional 2 footer or so through the ice, when all of a sudden my Jawjacker went off.  I ran to the rod and grabbed it as the sturgeon at the other end decided to let me know it wasn't very happy to have a hook in it's mouth... Immediately my reel started losing line as the fish swam straight away from the ice hole.  Unlike any of the other fish I've ever caught through the ice,  this fish swam at a steady pace directly away from me and there was nothing I could do to even slow it down.  Once I began to gain some line back on the fish, the battle turned into a yo-yo game of who was going to give up first.  As soon as I reeled in a few feet of line, the sturgeon would decided to take it right back plus a little extra just to show me I was in for the long haul! This battle continued until I was able to get the fish up toward the hole and then a whole new dynamic entered my mind as I now had to figure out how I was going to get this fish out of the hole.  While fishing the fish and holding the pole in one hand, I was reaching into the water past my elbows to try and get the fish's head to turn up into the hole.  Just as I was about to give up and unhook the fish under the ice, I was able to get it's head turned and began up the hole.  Once the tip of nose came above the water, I reached down to grab the fish behind it's pectoral fins to lift it out onto the ice. By now the fish was out of the water up to it's front fins and it was close to 2 feet long just from the tip of it's nose to it's pectoral fin... just then my barbless hook popped out of the fish's mouth, nearly missing my buddies face, and my fish I had just spent the last few minutes fighting with slipped back down the hole and swam away... 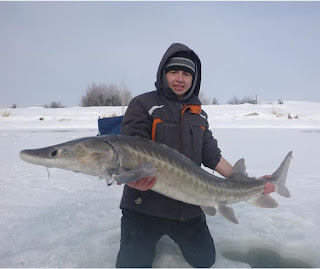 As angry as I could have been that I didn't land that big fish, the fight I had was by far the most epic battle I have ever had on the ice.  I was still smiling ear to ear with the fact that I got a glimpse of how big this fish was, was truly amazing.  Everyone in my fishing party kept fishing as we were all on a high and a low from the recent events.  Shortly after we began fishing again, we started getting a few more fish on the ice.  Throughout the day, we all had battles that would make lasting impressions on our minds.  We all pulled in fish that were very large, much bigger than any other fish we have pulled through an ice hole.  We also lost a few fish that came unhooked or just came off at the tip of the ice that were absolute monsters! Throughout the day the 5 that were in our party ended up catching around 30 sturgeon + or - a few. 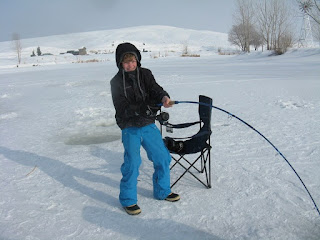 At the end of the day I look back on the experience and it all seems a bit surreal.  I was pulling sturgeon through the ice, lifting them out of the water, and then releasing them back down the hole.... I fought a fish so hard I could barely feel my arm afterwards.  I pulled a fish out of the water that was close to, if not older than I am.  This trip was well worth the drive, well worth the $25 to fish at the Poor Fish Ranch, and well worth the time.  I would encourage any avid ice fisherman, or any fisherman for that matter, to reach out to Jim Schwartz and take the opportunity to fish his pond for these amazing fish. 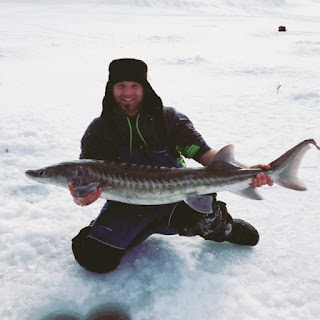 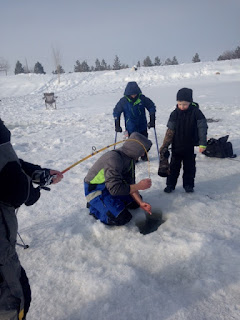 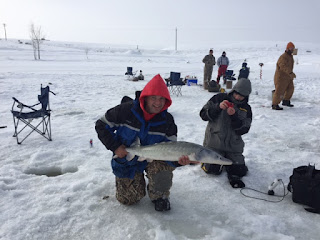 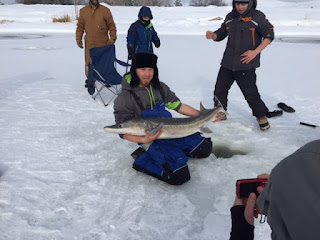