"How NOT To DIY Paracord Gun Sling" 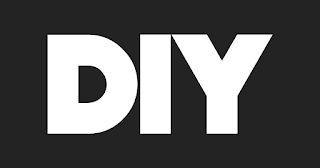 Paracord is one of those things that became rather trendy for a while then died of a bit, but the functionality of having an abundance of paracord while in the woods is priceless.  I have used paracord numerous times while hunting to help secure an animal to my pack, fix broken gear, or even to make a shelter.  I have also used it countless times while camping and scouting for just about everything.  Especially with kids, you will always have a moment you'll need some paracord.  These are some of the reasons why I decided to make myself a paracord gun sling!

I have been following Chelsea from SOS Gear for quite some time now and even have some of their items.  I have seen their gun slings and have thought they were pretty cool.  I will admit, I didn't want to spend any more than I had to so I decided I would DIY (Do It Yourself) and build my own. I mean really how hard could it be...

I had made a few bracelets here and there at family reunions and thought my bit of experience could be aided by a few YouTube videos in order to get me the finished product I wanted.  I watched 3-4 videos and was feeling okay about starting my project but had never woven any of the styles I was watching... I found one video with a pattern I could easily follow and was confident in which made up my mind that I was going to make this.

I purchased two colors of paracord, got me long board I could attach my gun sling brackets on, and began my work.  One of the quickest lessons I learned about making a paracord gun sling, was the fact that when you buy one from someone like Chelsea at SOS Gear, you aren't just buying a product that cost "X" amount of money for the supplies to make it, but you are also paying for the time they put into it... It didn't take long for me to get tired of tying my knots and making my sling.  After a few hours I realized the length of paracord I bought wasn't long enough so I ran back to the store to get the same color.... or course my luck was that I had bought the last one in that color so I had to improvise and add another color.... I wasn't to happy about this, but at this point of my project I was just anxious just to get it done.

By the end of my project I has spent hours tying knots, spent more than I wanted to on paracord due to not getting the right amount the first time, and my gun sling didn't look near as good as I wanted it to.  Yes it works, It twists a little on the ends where the paracord attaches to the brackets, but it lets me carry my rifle on my shoulder. 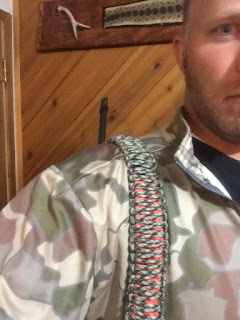 I'm sure my next one could turn out better, but if I could do it all again, this is what I would do: #1 get off YouTube and buy a gun sling from SOS Gear. Don't waste your money or time trying to make one yourself.  As satisfying as it is making something yourself and using it, I would like my gun sling to be more comfortable, look better, and be tied at a higher quality than mine is.  SOS Gear prides themselves for making quality products which are made to use, not just look nice.  Having an item that is functional, durable, and doesn't look like a 3rd grader made it is well worth the money.  So there you have it, this is my confession that DIY is not always the best way to go.  If you are in the market for a rifle sling, or any other cool paracord item, be sure to check out SOS Gear.