Every year I like to get over to Clark Canyon Montana and ice fish for burbot.  Last year unfortunately, I wasn't able to make it due to unsafe ice conditions.  This year however, I was bound and determined to make the drive to target these gnarly looking bottom feeders. 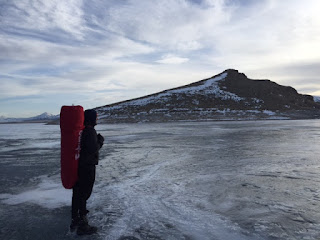 Last weekend, I hit the road with my cousin and a coworker right after we got off work.  As the burbot are typically nocturnal and night feeders, we knew that it would be a long night but we were anxious for the adventure.  All the prep work had been done over the past couple of days.  I had all of the gear, bait, and the snacks all packed up and ready to go so we could hit the road as soon as possible.  As we were driving the 2+ hour to Cark Canyon Reservoir, I was explaining to Shane and Keegan all of the different things we needed to do to get set up before it got to dark to see.  It then dawned on me that I had forgotten my lantern which was going to be our main source of light for our trip... We had a few other lights that would get us through, but I couldn't help but wonder what else I may have left behind... 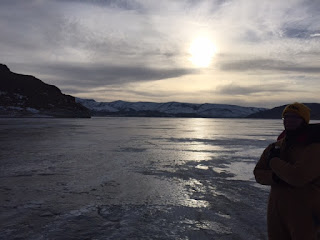 As we got to the reservoir, the wind was blowing about 20 miles an hour with gusts much stronger than that.  We loaded up our sled and threw the other gear on our backs to head out fishing.  The interesting part of this trip was that the week and half previously had been abnormally warm.  As we were stepping on the ice, the temperature was 45 degrees, even though it felt much colder than that with the wind.  The ice had a thin layer of water on top which made for a eventful walk out to where we were going to fish. 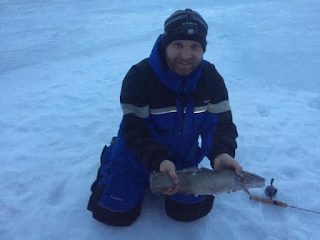 Luckily we were able to set up and get all of our holes drilled before it got dark.  It took all three of us cooperating to get my hut set up with the wind.  After we got the tent up, we started working on getting all of our lines out.  We rigged up with white glow in the dark tube jigs tipped with sucker meat, and within 15 minutes we had our fish burbot on the ice right before dark!

As soon as we knocked the skunk off and knew we weren't going home empty handed, the trip was a lot more relaxing.  The reason I love getting over to Clark Canyon to catch these burbot is because they are one of my favorite eating fish.  One thing to keep in mind is to remember to check the rules and regulations because every area has a few different guidelines.  At Clark Canyon you can only have two rods per person with the daily limit (as well as possession limit) of burbot being 3 per person.  Also you can only have 1 burbot per person that is over 28" long.  Keeping 3 per person will definitely give you enough great tasting fish to make the trip worth it. 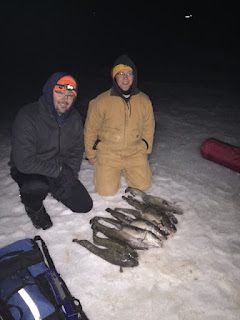 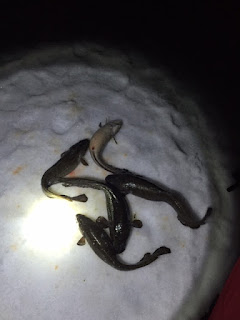 After our first fish, we sat for quite a while with no action.  We decided to bust out the grill and cook a few Johnsonville Beddar with Cheddar sausages and tortillas... ha the only reason I clarify what brand and flavor of hotdogs we were cooking is because from this point on, if we had a slow time on the ice, all we had to do was put another cheddar dog on the grill and without a doubt we would have a fish on the ice by the time it was done!  Seems how the burbot are bottom feeders, we had our lines set just an inch off the bottom.  When the burbot would bite, the JawJackers would set the hook and the fight was on! Most of the burbot would fight really hard but we had one or two that just seemed to come in without much of a battle.  The later in the night we got, the harder the fish would fight.  By the end of the night, the fish we were pulling in were aggressive and typically larger than the ones we caught earlier in the day.

We had a blast keepin up with our JawJackers going off.  We kept our lines re-baited, and even pulled them up once and a while to recharge them with light so they would glow under the water. By the end of the night, we had caught 8 on the JawJackers and one jigging.  It was a great time just chatting and joking around with some good friends. I hope you enjoy the pictures and if you want to make a trip out there next year with me, just let me know!  Here are two videos of us reeling in a burbot this trip.  With the wind you can't hear much of what I am saying, but it is still fun to watch these fish come out of the hole!