The Topic of Two Points...

We all know how ruthless and unfiltered social media can be.  We see time after time how "anti-hunters" attack hunters when they post pictures of an animal they harvested.  I myself have had multiple "anti-hunters" comment on some of my Instagram pictures.  I had one particular person start talking about my daughter who was in a picture with me with a deer I had harvested...  As much as I could prepare myself for this type of interaction, when this individual started talking about my daughter I will admit I bought into the drama and "fought back" with this person trying to convince them that I was right in the way I was choosing to raise my daughter.

I share this story with you to set the stage of the topic I want to bring up.  Almost every hunter everywhere can relate to this story to some degree... Not only can every hunter relate, but I would also put my pay check on the fact that I believe that 99.9% (if not more) of the hunters out there would also support me and my daughter celebrating over a legally harvested deer.  I can honestly say that I don't know a single hunter who would tell me that I am a bad father for raising my daughter in an environment where she sees me bring home legally harvested animals.  Sooo.... my point that I am getting to is, if we are all willing to back each other up when it comes to defending our rights, privileges, actions, and passions why then do we criticize each other the same way the "anti-hunters" do? Let me explain...

On social media last week I saw multiple posts stating things such as this: 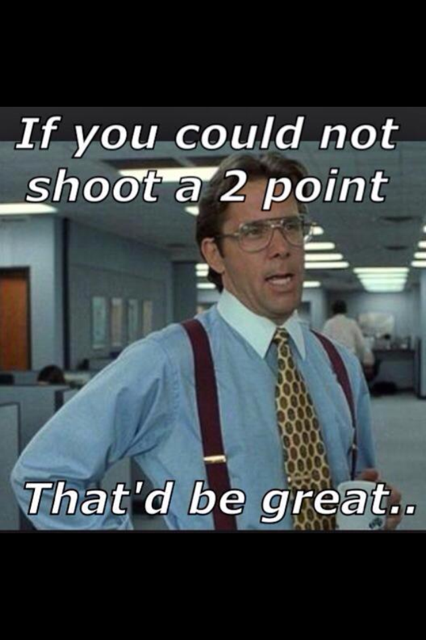 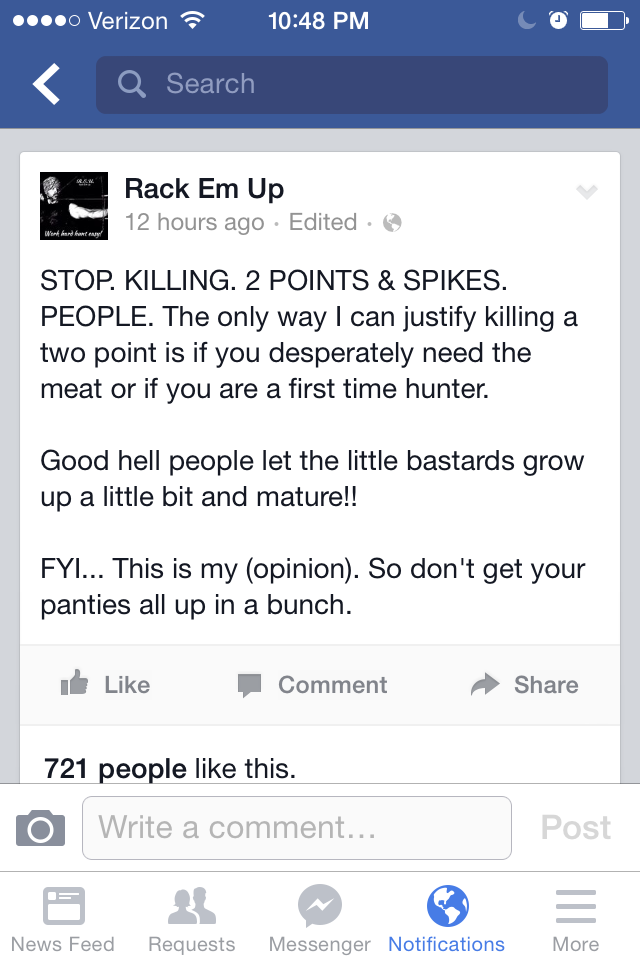 These are only two of the many posts and pics that I have seen sharing similar messages.  The conversations and comments on these posts varied from research based theories backing up both sides of the argument, to flippant vulgarity criticizing individuals for thinking/believing in something a little different than the person making the comment.  When I took a moment to sit back and read these posts (which I really regretted) I was overcome with such a negative impression on sportsmen and women today... I was full of hate, anger, sadness, frustration, and confusion all because of what I was reading.  Then it dawned on me that this hostility and approach seemed a little bit to familiar to me... I felt this same way when the "anti-hunter" attacked my post with my daughter and I celebrating over a deer I had just legally harvested...  I took a moment to look back on some of the past "arguments" I could find on social media between hunters and "anti-hunters" and I realized that the same strategies, attitudes, and biases were present in both of these conversations.  The only difference between the two was that one was from a non-hunting individual aimed at a hunter for the way they choose to live the sport, while the other was from a fellow hunter aimed at another hunter for the way they choose to live the sport.  If I am the only one who sees the hypocritical theme in these two scenarios please feel free to tell me I'm crazy in the comments below!

I find it quite hypocritical to have a social media individual "take on" the anti-hunters for attacking a person's post or picture, yet turn around and do the same thing the anti-hunter is doing with another fellow hunter.  The authors of these posts would justify their actions by saying comments like, "thats just my opinion so don't get upset..." As we well know, just because you have an opinion about someone or something, it doesn't mean that it is best to voice that opinion, especially when that opinion puts down another person.  I am all for having an opinion and standing up for what you believe in so don't get me wrong.  I am also just as much a believer that our opinions and beliefs do not have to be, nor should they ever be, forced upon someone else or used to make someone feel bad about their own decisions.

When it comes to hunting, each state has it's own management plan which is specifically adapted to that state.  Even though these plans may be far from perfect, it is important to remember that we all live in different areas, hunt differently, and have different regulations which shape our hunting experience.  We cannot expect every state and every hunter to hunt in the exact same way regardless of their situation.  Some people can spend weeks or months in the outdoors while others only have a couple hours the whole season.

These are some of the reasons I was upset reading comments where hunters were putting down other hunters for the way they hunt, and even making comments like, "Sucks to be those kind of dudes"... 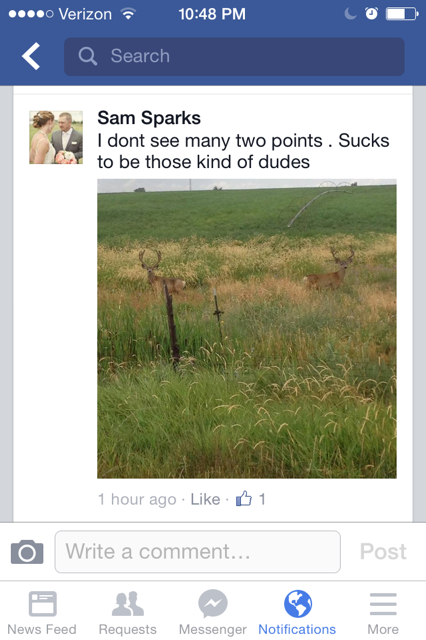 Comments that discredited the topic of providing meat for your family implying that every hunter spends far more than what it would cost to go buy the same amount of meat.... 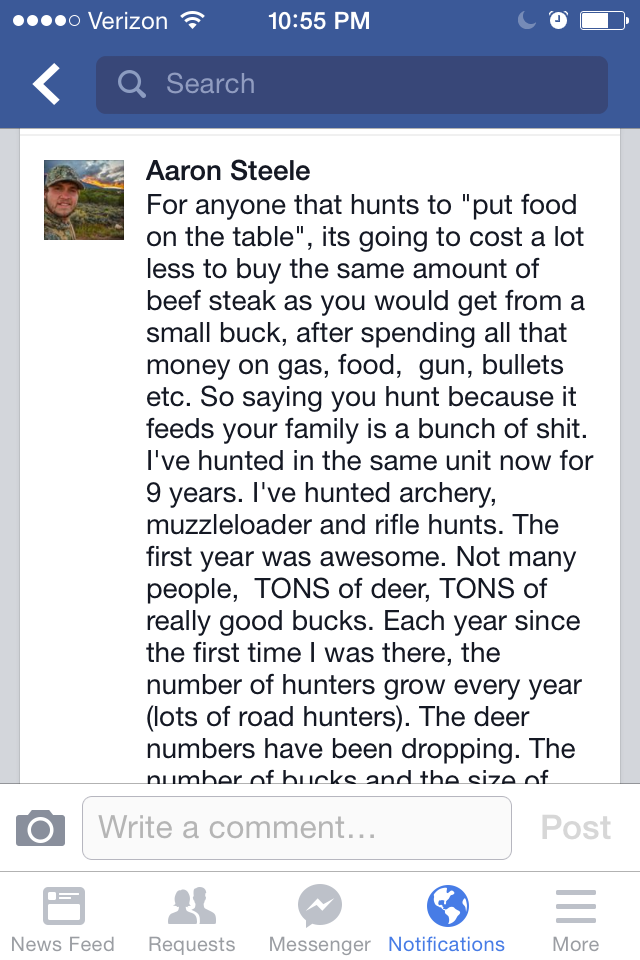 I myself have a very hard time this this argument seems how I save A LOT of money every year when we harvest the animals we do.  I could see how it would not save you any money if you are the type who gets all new gear (or even some new gear depending on the brands and gear) every year.  When I am still using the camo, gun, and gear I used 10 years ago, believe me I save a lot of money when we harvest an animal and process it ourselves!

In the end after being disappointed in the way us hunters were treating one another I decided I would focus on the positive comments which often focused around sportsmanship and treating other people with respect.  I will admit I got pretty involved arguing with people on the posts about the way they treated other hunters rather than about the topic they were discussing.  Once again I find it very hypocritical to complain about people who put down hunters and then turn around and exhibit the same behavior we are combating.

On the lighter side, I did see posts and pictures that circulated social media shortly after which had a much more pleasant message such as: 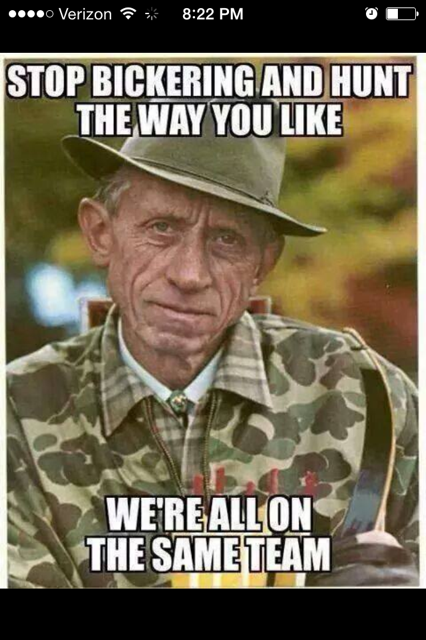 I believe that this is what we need to focus on.  No matter where you sit on the topics of two points, management, maturity, or any other hunting topic, our efforts need to be focused on supporting one another.  This goes for those making the posts as well as those, like myself, who bought into the drama and "fought back" to defend other hunters... We are all on the same team and need to show each other support! But once again, that's just my opinion so don't get upset :)
Posted by Idaho Pursuit at 6:40 AM