This post is not aimed at any one group of outdoors enthusiasts but rather as a general suggestion for any of us who may travel to an area other than our own to hunt or fish.  I am very fortunate with where I live.  I am surrounded by wonderful hunting opportunities including elk, deer, moose, as well as small game and bird hunting also.  I am also smack dab in the middle of some of the countries greatest fishing/fly-fishing locations that are available.  To put it lightly I would say that where I live could be considers an outdoors paradise to some.  With that said, it is not uncommon for me to run into a few other outdoors men while I'm hunting or fishing who share the same passion for the sport as I do.  As much as I wish I could be the only person who knew about some of my favorite hunting or fishing spots, I am a realist in the fact that I understand my desire is not reality.  When sharing with those I encounter on the mountain or at the lake/river, sad to say I am often appalled at how rude and inconsiderate some individuals can be.  The following is not a set of rules we need to follow but rather they are suggestions that I feel could make everyone's experience better when encountering someone in "your spot".

Respect the other person:
As upset as you are it is a key principle to remember that we are all human, make mistakes, and are not perfect.  Even if you think the person who is in your spot is doing it just to piss you off, chances are they have the same motivation you do which is to enjoy the outdoors.  On the other hand if you see someone fishing or hunting in an area you were wanting to be, do not be immature and ruin their experience just because you are jealous or upset that they are "in your spot".  I have had my share of ignorant people attempt to ruin my experience by yelling while I'm sneaking up on an animal, circle their boat over top of my fishing lines, paddle their float tube right through my fishing lines, or purposely spook an animal just because they were jealous I had the opportunity they were wanting.  Respect them as a person and do not ruin their experience.  This includes respecting their space.  If you are wanting to hunt or fish in that spot don't just assume its public access and you can go as close to their party as you want. Yes legally that would be okay but out of respect for them it would at least be nice to ask them if they would  mind or if they would be upset if you hunted/fished next to them.  My worst example of this is fishing Henry's Lake in the fall.  If one person catches a fish it seems to attract every boat and float tube around who feel the only fish in the whole lake must be right under that person's boat... Respect the other person's space and don't be entitled to believe you are the only one who deserves to have success.

Respect the land:
This is one I feel very passionate about and am sad to see happen in any location.  No matter if it is right in your back yard or if you're clear across the world, respecting the land is a principle that needs to be followed.  As I mentioned earlier I would love it if I was the only person who knew about some of the hunting and fishing spots I enjoy, but reality is that I'm not.  As upset as I could be when I find someone in my spot, it upsets me so much more when I get into that location to see that the person who was there last treated the spot will little or no respect.  I have picked up bags and bags of garbage other sportsmen have left behind and am just shocked to see how some of them destroy the natural landmarks (trees, rock formations, and other items) with little or no thought of those who may be there next.  When people treat an area as if it is dispensable, replaceable, or of little or no worth I often wonder why they were there in the first place.  I was taught by my father to not only take care of an area but to try and leave it in a better condition than how you found it.  If all sportsmen lived by this principle we could all enjoy these "spots" a lot more than what we already do.
Respect the wildlife:
When hunting or fishing in an area, especially when traveling far distances, there is always a sense of pressure to not come home empty handed.  Not only do people not want to go home empty handed, but they also want to come back with a trophy.  While this may be our goal/desire at times, if that is the only reason we are out we may just want to stay at home.  It is not bad to have this goal/desire if we truly respect the wildlife we are after.  I know of a few fisherman who are so controlling about their spot that they keep every fish they catch to ensure that no one else will catch that fish there.  These fisherman have wasted fish at times because they keep more than what they can eat.  I have also heard of hunters leaving animals in the woods because they weren't "big enough" or cutting off antlers and leaving the rest of the animal because they only cared about the horns.  Hearing a hunter say something like, "yeah we gave up lookin for it because it just wasn't worth it" is poison to my ears.  No matter what terrain, what species, or gender the animal is, it is worth your effort to do all in your power to recover than animal.  I have found two quotes/sayings that have really summed up my opinion on this principle and here they are. 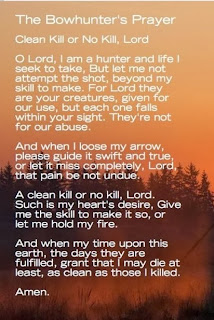 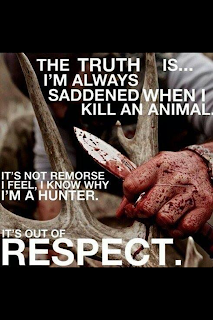 These three simple principles are standards which can and should be followed to not only make your experience in the outdoors better but also the experience of everyone else who may follow behind you.  No one wants to go outdoors for a relaxing hunting or fishing trip and deal with some person who is rude, ignorant, or immature.  Respect the land, the people, and the wildlife no matter where you are, especially when hunting out of state or out of your original area.  Remember we are all guests in every area we hunt or fish.  It is not our own and we have been blessed to enjoy it for the time being.  Being an outdoors men goes deeper than filling tags and filling the freezer, its about conservation, management, and friendship.  The outdoors is supposed to teach young men and women about respect, hard work, dedication, and other wonderful concepts yet fails to do so when bombarded with the irrational actions of those less observant of these principles.
Posted by Idaho Pursuit at 8:36 PM