I know I've said it before, but I will say it again, I consider myself a lucky man.  My wife and I just celebrated our five year anniversary and every year we have done something outdoors for our anniversary.  I don't know many wives who genuinely want to go camping, fishing, and/or hiking for their anniversary but mine does so I consider myself to be pretty lucky.

My wife and I decided we would go over to Palisades Reservoir  and go camping, fishing, and hiking for three days.  We have been over in that area quite a few times but we have never spent enough time to really explore the area and enjoy what it has to offer.  We had heard that there were two beautiful lakes up above Palisades Creek which had native Cutthroat Trout in them.  We decided that on our first day of our three day get away, we would drive to Palisade's, set up camp, relax and do a little fishing in the reservoir.  To make a long story short, nothing went our way that day and we were both wondering how things could possibly get worse. We ended up having problems with our camper, problems with my jeep, a brand new anchor we purchased hours earlier got stuck in the bottom of the reservoir so we lost it, and about twenty other things all decided to go wrong.  So by the end of day one we were so frustrated and annoyed we called it a night and decided we would wake up when we felt like it and just play it by ear for the rest of our trip.

The next day we slept in, ate breakfast, and then decided we would still go on our hike to the Palisades Lakes we had heard about.  We didn't start our hike until 12:30 p.m. so we really didn't have any set plan of how far we would go or anything.


The first thing I liked about the hike was the fact that the trail was right next to Palisades Creek.  There were multiple places where a person could stop and fish in the creek for a bit or even just put their feet in the water to cool down.  With us starting our hike as late as we did, the creek provided a nice cool breeze, which kept us moving up the trail.  Also, another major plus about this trail being right next to the creek was that I would guess about 75% of the time, the trail was covered with shade which also made it nice for our late start.  The area was beautiful and full of a variety of views including mountain sides, valleys, cliffs, and the beautiful stream running down the bottom of the canyon.  Many people see mountain goats and other wild life on this hike including bear and cougar. The only wild life my wife and I saw was a mule deer doe, which was just walking on the mountain side.

Due to our late start we decided we would head up to the lower lake and then make the call if we were going to continue to the upper lake or if we would just spend the rest of the time fishing.  Before I go on, I have to give a shout out to Teton Sports for my awesome Summit 1500 backpack which I have used almost every weekend since I've gotten it.  I also used my Ribz Front Pack to pack some of my fishing gear my wife and I would need on our hike.  I love these two items and wouldn't go on a hike/fishing trip without either of them! Be sure to click the links and read my reviews on these two items!

Now back to our hike... The hike was honestly a fairly easy hike. It never had any crazy incline or scary switch back that I would consider difficult.  The only switch back to the lower lake was quick and simple.  We even passed a group of older ladies on the hike who were around 65 years old. There were all smiles and enjoying their adventure.  When I say that this hike was easy in my eyes, remember that I am used to hiking in the back country chasing elk and deer.  The last thing I want someone to do is to read this and go on the hike expecting it to be a walk in the park.  There were some areas with loose rocks which could be a little dangerous.  The trail does side hill along some pretty steep mountains which puts you on some fairly dangerous drop offs.  These areas were ones that I felt gave the trail its variety and kept us entertained on our hike. I liked how the trail was never the same scenery for too long; it kept us entertained the entire time on the hike.

When we got to the lower lake, the trail lead us right into a small camp site which had a few backpackers camped out in it.  The camp site was nice and clean and very peaceful.  I would totally come back and camp there some time now that I've seen what it is like.  The lake was amazing! The water was crystal clear blue and surrounded by beautiful scenery.  My wife and I hiked around the back side of the lake, threw out our fishing poles, and sat down to rest.  Because we slept in and had a late breakfast we had planned to eat a late lunch when we got to the lake.  I had packed a few Mountain house meals but soon realized that I forgot to pack something to light my backpacking stove to boil the water on...  So we just chilled out for a while at the lake and ate some of our light snacks we brought with us.  We took a short break and talked about whether we should head up to the upper lake or not.  The upper lake was only just over two miles more of a hike but we decided with the time that we would just fish on the way back to our vehicle and cook ourselves some dinner at camp.

On the way back down the trail we stopped in multiple places and fished.  We were catching fish, or at least getting bites, pretty much every cast.  I was using a Mepps spinner and my wife was just tossing a worm in and letting it float through the deep sloughs.  The fish we caught loved to fight for the size they were which made it fun.  The bigger fish were colored up real nice and made our trip worth it.  On our way down, we took lots of pictures of the small water falls and other scenery provided by the creek.  We heard that the upper lake had some good water falls to see around it. I would assume that by looking at the smaller ones around the lower lake, that the upper water falls were worth seeing.

With all of the fishing we were doing, we took a lot longer walking out than we did walking into the lake.  We both decided that next time we would wake up a little earlier and be sure to bring everything we needed on our hike so that we could make it up to the upper lake and see what it has to offer.  We are planning on backpacking to the upper lake and camping there either later this summer or it will be one of our first trips next spring.  I've already recommended the hike to a few friends who are always wanting to get outdoors and see what Idaho has to offer, and I would encourage anyone who may be up in this area to do the same!  This hike was definitely a nice relaxing hike with plenty of rewarding adventures on the way. 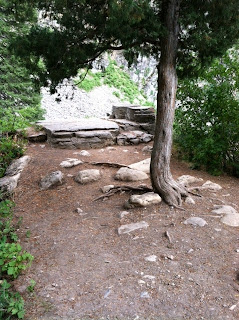 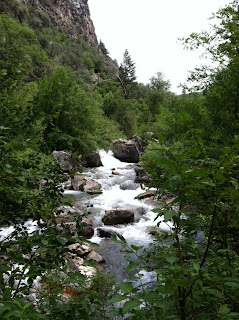 Posted by Idaho Pursuit at 9:15 AM