I often hear guys talking to me about their wife and how she absolutely hates how much they hunt.  I just smile and tell them I feel sorry for them, but that it is almost as hard when you're wife shoots a bigger buck than you!
I am extremely lucky to have a wife who hunts with me and shares my passion for the outdoors.  A lot of my friends always ask me how I got so lucky to marry a girl who loves to hunt and fish.  My response to them is that I didn't.  When I met my wife, hunting was probably one of the last things on her to do list! I share with my friends my wife's story and always tell them its worth a shot for them to try with their wife.

For me, being outdoors has always been part of my every day life.  Growing up my family spent much of our time outdoors either camping, boating, fishing, hunting, hiking, or anything else we could find to do.  When I was single I often dated "city" girls and "country" girls and thought I had it made up in my mind that there was no way I could ever marry some "city slicker" who wouldn't share my appreciate for the outdoors.  Just my luck, I ended up meeting a beautiful, patient, understanding, city slicker who I fell head over heals for who is now my wife!  For my wedding gift from my father, my wife and I received brand new compound bows! For me I was ecstatic but for my wife she was questioning what in the world she had gotten herself into.  Growing up she had been around guns a few times, but her and her family were just not involved in the same types of things I had grown up with.  When my wife got the bow she told me that she would shoot it with me as a hobby, but she had no intentions of hunting or killing anything with it.

This was the route my wife took until she started shooting more often... Quickly she realized that she was actually pretty good at shooting a bow.  I took her to a few 3D archery shoots where she was able to show off her skills and even show me up every once and a while.

After feeling the excitement and confidence in learning how to shoot her bow, my wife decided she would come and sit in a tree stand with me while I hunted.  I had set up two treestands right next to each other earlier in the year because I was wanting her to come with me at times.  My wife sat with me one particular evening and watched a few deer come into our stand.  Sharing this experience with someone who has never sat in a tree for hours until the animals around them start walking around is an experience hard to capture the feelings behind.  Needless to say, my wife had felt the fire and had a desire to get her hunting license.  Since then she has taken a bull elk, mule deer buck, and a bow kill white tail doe!  She loves to hunt and I consider myself a lucky man! 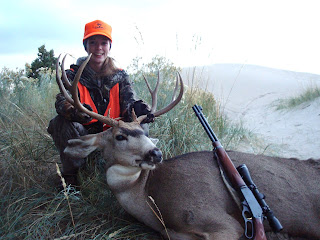 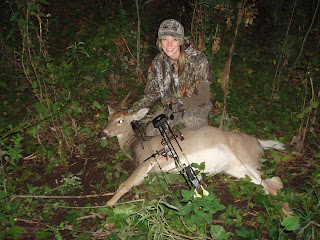 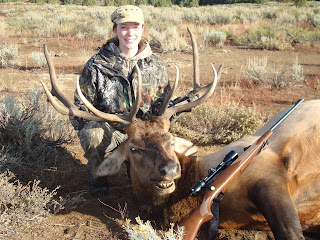 I always tell my friends that getting their wife into the outdoors (and not always killing something) can be some of the greatest times you have as a couple.  And who knows, maybe they will feel the desire to go with you just to show you up :)  Always remember though, if someone is forced into anything they do not want to do, most of the time all that does is push them further away than they were before.  So when sharing the outdoors with those you love make sure it is what they want to do so that you can help them have a good time!
Posted by Idaho Pursuit at 6:42 PM