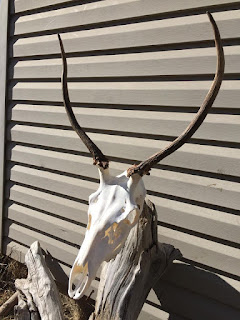 As I this year's hunting season approached I caught myself daydreaming about my hopes and dreams as to how I would like this year to pan out.   I envisioned bugling bull elk screaming in the dark ask I patiently inched myself into his element waiting for the lighting to bring a vision to images I had painted in my mind.  While I dreamed about this moment I put in work in attempts to do all I could to make this dream become a reality.  I have been around and involved in many successful hunts and have seen some amazing bull elk hit the ground, yet when was it going to be my turn?  When would I be the one behind the bow or grabbing the horns of a recent harvest?

Numerous trail cameras, hikes, scouting trips, and research all before season opener caused myself more anxiety than I feel it had prepared me for the season.  The area I had planned on hunting had far less sign of elk than previous years.  I often saw more boot tracks than I did elk tracks.  I saw coyotes and found winter kill almost every time I went out.   Through the despair I was feeling I endured my doubt and still sought out after the opportunity I had thought of all year long.  I had hunts which were full of disappointment as well as hunts which kept my drive a focus at an ultimate high while still never filling my tag.  While my dreams were big, my exceptions were quite low.  I had committed to shooting the first elk, no matter what size, as I had my family and their needs at my focus 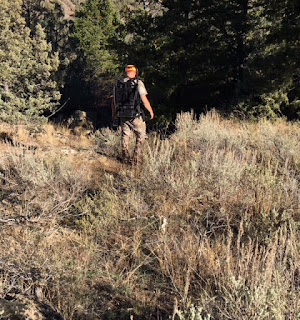 As archery season came and gone I had seen a few elk but had never gotten close enough for to seize the opportunity.  I had one brief false sense of hope one day as I was driving off the mountain as I spotted a calf elk feeding on a small bush about 40 yards off the road.  I doubted my mind as I thought there was no way a elk, even a calf elk, would be feeding this close to a road.  I stopped my vehicle, found my release, grabbed my bow, stepped off the road, knocked an arrow, and let one fly.... I was baffled and confused but what happened next confused me even more.  As I watched my arrow fly true and pass through the calf elk, the elk merely flinched and took half a step forward... I literally shook my head, knocked another arrow and pulled back again.  By then the elk trotted a few steps and laid down.  As confused as I was, I decided I would place another arrow to quicken what I had hoped would already be a quick death for this calf.  Shortly after my second arrow, I could see the breathing stop, I was excited yet unsure about my experience.  It was nothing as to what I had hoped to have felt nor was it the monumental moment I had prepared for all year long.  Upon further examination, I found that this calf had two large wounds which were literally crawling with maggots.  The stench of the elk was almost more than I could handle.  My heart sunk as my already less than glamorous elk was now not even edible as to why I had committed to shooting the first elk I was able to.  I called IDFG and took care of the process of reporting and exchanging the rotten elk for a new tag.  I remember vividly, as I grabbed my new tag, the doubts filling my mind saying, "what good is a second tag... I was lucky to even get one elk let a lone get a second one this year".  I am not one of those hunters who shoot a big bull every year and then go out and purchase a non-resident tag to go out and harvest a second "wall hanger" during the same season.  I was full of doubt yet committed myself to seeing this season through.  I was raised to never give up and to never quit, and that was exactly what I was going to do.

As the General Any Weapon Season rolled around I did the unthinkable... yes I took a day off work... I selfishly sought out to fulfill my own desires rather than being an adult and taking care of the daily responsibility list.  I rarely take a day off work to go hunting, not because I don't want to, but because my days off usually get used for other adult/parent responsibilities which I am not complaining about, they are just part of life.

Early that morning as I loaded up my vehicle I decided I was in now way coming home empty handed.  I loaded my shot gun, a few duck decoys, my waders, my fishing poles, as well as all of my hunting gear.  I planned out my hunt in my mind, I would chase elk until around 11 and then head back to my vehicle.  At that point I planned on driving to the river and either shooting ducks or catching fish so that I could at least provide dinner on my day off work.  Needless to say, my hopes for tagging an elk were almost non-existent. 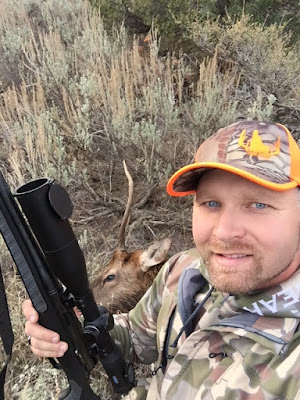 As I pulled into the area I wanted to hunt, I slowly got out of my vehicle and grabbed my gear.  As I was strapping on my backpack I heard bugling in the distance.   My level of excitement always rises when I hear elk bugle while my level of expectation as been able to subside to prevent disappointment.  With the sounds of bugling all around me while I hiked in the dark, my expectations were growing in anticipation of watching some big bulls battling it out as the sun came up.  I hiked for a few miles in the dark and got to the spot I wanted to be right when the sun came up.  I could hear elk above me, below me, and on the ridges all around me.  I began to hear the loud cracking and grunting of two bull elk fighting.  The sounds were as loud as thunder and I could tell I was within only 100 yards or so of what sounded like an epic battle.  The sun was just peaking over the ridge line as I slowly moved toward the loud and escalating confrontation.   I could see glimpses of the two bulls aggressively spinning around while their antlers rattled together.  I crept up to a vantage point where I was able to sit back and watch the two bulls continue their battle.  As I sat back and enjoyed the show I saw cow elk wandering through the trees and other small bull elk gaze on much like I was as the two large bull elk established which of the two were the herd bull. 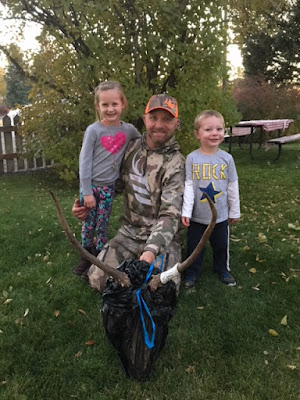 At this point I was so engrossed in the show that I nearly forgot why I was there in the fist place.  I looked across the opening to my left and saw two spike elk walk out of the trees in curiosity of all the commotion.  I turned and raised my rifle to get a better look and the two spike elk both caught my movement and stared in my direction.  With absolutely no cover between us, I knew that the distance would not be negotiable.  I ranged the two elk at 370 yards and my nerves jumped to an all time high.  I had practiced out to 400 yards, but my furthest shot I had ever taken on an animal was just under 300 yards.  I felt confident in my preparation and decided to take advantage of the moment I had been given.  I set my cross-hairs on the front shoulder of one of the spike elk and slowly squeezed the trigger.  I watched the elk flinch as my shot hit him in the lungs.  The elk bolted down hill toward a shallow canyon and then disappear.  I gathered my composure and took of in his direction.  As I got closer to the spot where I had last seen him, I started seeing blood and plenty of it.  I moved in the direction I saw him go and quickly came upon him bedded down.  He jumped up and took off as I fired another round in his direction.

As I saw his body fall lifeless to the ground, the realization that I had finally filled my elk tag started to creep into view.  I walked up to my elk and placed my hands on him, I was filled with a mix of emotions.  As much as I wanted to shoot an elk for myself and fulfill my own desires as a hunter, the only thing that was running through my mind was how humbled and grateful I was that my family now had the meat we so badly needed.  Our freezer was nearly empty, which may not seem like much of a tragedy to some, but my family has so many food allergies and sensitivities, we rely heavily on wild game for our food.  I reached for my phone to let my loved ones and friends know I had harvested an elk.  Phone calls and text messages sent which were all received with the same humility and gratefulness that I myself was feeling.  I said a prayer of gratitude as I grasped the skinny horns of the young spike elk and realized that my dreams and hopes of tagging a big bull elk were merely an illusion of what my heart truly wanted.  What I wanted was to harvest the elk God wanted me to harvest.  As I still would love to shot a big bull elk, I now see that my experience of harvesting that young calf elk which was full of maggots earlier in the season, as well as my previous years of unfilled tags were all preparing me in one way or another to set my goal on harvesting the elk God gave me rather than the elk I see in magazines.  My time will come for a big bull, and until then I will harvest the elk God gives me in the moments he provides me.  With that as my focus, I will always be grateful for the experience regardless of where my tag is at the end of the season.