A Man's Guide on How To Get Your Wife Hunting 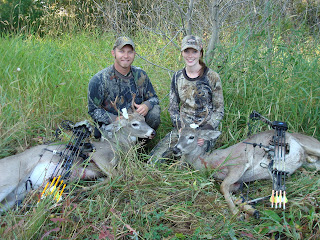 Alright folks,  as I spend some of my evenings browsing through (stalking) my friend's on Facebook or other social media sites.  Once and a while when looking back through someone's pictures I find a certain type of picture that just kind of gets to me...  The type of picture that I am referring to is a picture of one of my guy friends with their wife back when they were dating and/or engaged.  Often times, I see these guys smiling ear to ear as they are introducing their girlfriend/fiance to shooting skeet, target shooting, or just plinking around with a gun.  Sadly...  More often than not, this is often the last time I ever see a pictures of these women with a gun in their hands (as well as their husbands with as big of a smile on their faces).  My post today will be dedicated to all of those husbands who want to get their wives into, or back into, hunting and spending time in the outdoors with them.  Here are 10 rules/suggestions to help you get your wife into the outdoors with you!

Rule #1
This is BY FAR the MOST important rule to follow if you want your spouse to EVER get into the outdoors, let a lone hunting, with you.  Put your FAMILY FIRST!!!!! No spouse will ever, or should ever, have to convince their husband to spend time with their family rather than going hunting again... We all know that no matter how much time you spend at home, some times your spouse will never be happy with you heading to the mountains, but if your spouse knows that if it really came down to it, there would be no question in your mind that your family would come first, then your spouse will be more understanding and open.  When your focus is your family and the experiences WITH them, then your spouse will want to be a part of the memories you are making no matter where they are... even in the mountains!
Rule #2
Don't set out to convert her to become an avid outdoors woman.  People, especially women, aren't stupid and can tell when they are being treated like a project.  We all know that guy who dated a girl just for the approval of his friends but never had any feelings for her... The same goes for you husbands and/or boyfriends who are getting your girl into hunting just to show her off to your outdoor buddies... DON'T DO IT!  If you ever want her to join you hunting you have to have your intentions set on meeting her needs!

Rule #3
Don't start with hunting, start with the outdoors.  I know there are people who feel it is a good way to teach a kid how to swim by throwing them into the deep section of a swimming pool, but as a counselor I can tell you that there are much better ways to ensure a happy ending than to throw your wife right into the trenches.  Get her into your hunting areas and show her the parts of the mountain that you find fascinating and beautiful.  When you go, make it special for her.  Plan it out, make a picnic, talk to her about everything SHE wants to talk about, make her feel like it was planned for her and don't go for your own agenda.  My wife said one of the things that got her to love the outdoors is to see my "soft side" while in the outdoors.  She says that even though it sounds cheesey, she loves knowing what my favorite wild flower is and remembers me stopping on our hike to pick her a bouquet of them. 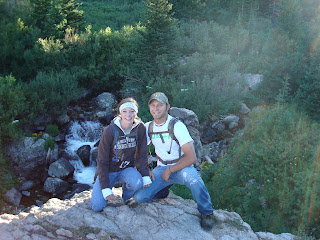 Create memories that are special for the two of you... not just for you.  Of course we all have a favorite memory of our first kill or our biggest buck/bull, but often your wife may not be able to relate to that.  Create memories in your hunting areas, or just in the mountains, that are special for both of you.  Take pictures of the two of you and take pictures of just her in the outdoors.  THIS IS A BIG ONE! I know you may think I'm stupid or crazy, but I can promise you that if you tell your wife you want to take a picture of her over looking a mountain range, next to a water fall, or in some other setting... She'll feel how much you enjoy and appreciate her being there with her.  THEN, take that picture and treasure it. Put it on your work desk, desktop on your computer, and on your cell phone screen shot...  BUT make sure you are doing it because you actually love her in that picture not just as some plan/scheme to get her to go hunting with you... (after all isn't that the type of stuff you did when you were dating?)

Rule #5
Get her the right gear.  Anyone who has hiked knows that if you have the wrong pair of boots, if you are over dressed/under dressed, a poor fitting pack, or some other miss matched gear, then your time in the outdoors is tainted.  Be sure to get her gear that will help her enjoy her time out there rather than thinking about her blisters on her ankle the whole time.
Also get her a bow or a gun of her own that she can feel confident with.  If she is new to them, borrow one and see what she likes.  I remember when my wife got her first bow... We set up balloons on targets all over our backyard and let her try to pop all of them.  This may seem childish but you can relate to the feeling of making a good shot.  The feeling of accomplishment is a genuine motivator to keep pursuing such adventures.  If she doesn't have the right gear (to high poundage of a bow, to large of a gun) then it is harder for her to feel this and get discouraged. 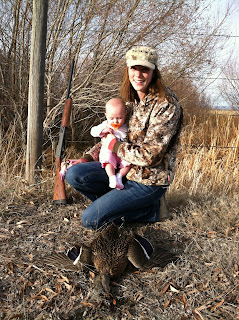 Patience!!! If you ever lose your patience with her while in the mountains, then is when you need to take all of the advice people gave you on your wedding day and keep your mouth shut... If you are anything but supportive of her, she will feel that.  If a women feels like a burden, a headache, or belittled... then she will shut down and let you know that she is everything but incompetent.  If sh e is out of her comfort zone in the mountains, she will want nothing more than to get into an environment where she is comfortable and stay there.  A very wise man once told me if it's worth the effort now, it's worth the effort later so don't be in such a hurry that you screw it up.


Rule #7
When she is about ready to go hunting start of by taking her out with you without seeking to fill a tag. The feeling that she will get when you and her get close enough to an animal to seal the deal yet just sit back and soak it in, will be a feeling she will never forget.  I hear stories all the time of dads who get their kids in bow range of a bugling bull elk and enjoy getting lost in their kid's emotions of being so close to such a magnificent animal.   When your spouse witnesses such a feeling, it will not only start her own addiction to these interactions but it will also help her mentally prepare for this feeling before she had a weapon in her hand. 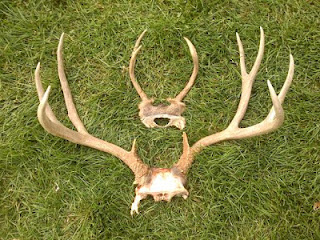 When she is ready for hunting, help her feel good about what ever animal she tags.  One of the first years my wife went out hunting, I wanted to show her that we cared more about filling the freezer than we did about the size of the horns.  To prove this to her, I arrowed a young two point mule deer and was thrilled to share the experience with her.... little did I know that later that year she would drop a heavy 3x4 mule deer in it's tracks... but even then, that made her feel that much more accomplished and excited when the time came for her to pull the trigger. 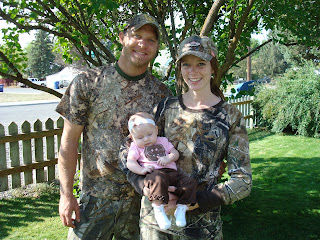 Remember she is a woman and has the right to change her mind any time... If she gets out and actually goes hunting with you, just remember that you have not "won" and the battle isn't over... My wife absolutely loved hunting when we were newly married but when we started having kids, of course her priorities switched to spending more time with them and less time in a tree stand.  That's okay! Let her do what she wants to do.  If you want her to eventually get back out there with you, support her and let her know you miss her but not in a guilt-trip type of way.  The more support she has when she chooses not to go hunting, the more likely she will be to return to it later. #Truth

Rule #10
Forget all of these rules and do what works with your wife! Everything I have written is really just a few things that worked for me, but as we all know every woman is different as well as every husband is different.  Do what works for you.  Do whatever you did when you were dating that got her out to shoot with you from the get go.  If it was just out of her own curiosity then rekindle that some how in a way that works for both of you.  Please once again don't treat her like a project and don't use her to impress your hunting buddies.  I asked a few women on social media what advice they had on this topic and this is what they suggested:

"You can't make someone love something, but EVERYONE loves a good time so make your time with her one of the best times she has had" Krysten Michelle Twitter @Krys_Michelle

"Don't push her, or intimidate her.  Let her enjoy it at her own pace" - Samantha Bellamy Twitter @Sambellamy0016

"Invite her on scouting trips, hiking, outdoors, seeing wildlife, possibly and bonding with  understanding your passion"

So in essence, good luck... When I first posted the question on social media asking how to get your wife hunting, I received plenty of responses saying "you don't", or "haha good luck" but as we all know, some of the best things in life don't come easy but are well worth it! As a husband who has a wife who hunts, I can say it is definitely worth it! One last thing to make mention... If she isn't into it and doesn't want to be a part of it... respect that and don't force her to be a part of it!

Posted by Idaho Pursuit at 8:13 PM

Email ThisBlogThis!Share to TwitterShare to FacebookShare to Pinterest
Labels: advice, couples, Family, Get your wife hunting, How To, hunt together, hunting, outdoors, women