This review is one that I feel strongly about and was so glad to have the opportunity to do!  This Hawke scope has solved one of my poor man problems that I have struggled with for quite some time now.  I have wanted to buy me a .223, .22-250, or .243 for varmint and coyote hunting for quite some time now but when the rifle alone will cost me $200+ and then I will have to buy a decent scope to put on it for another $150-$200... I have come to the realization that a separate rifle just to shoot varmints is not within my budget right now in my life.

Like many other hunters, I have a .22 caliber LR which I use for a number of different things but have never considered the possibility to use it varmint hunting at the distances that make varmint hunting fun.  Even with a good scope, the drop for a .22 LR is so great at further distances that being accurate at multiple distances with a .22 is nearly impossible... UNTIL NOW!

Hawke Sport Optics has developed a scope that is specifically made to make your .22 LR into a rifle you can accurately use at short or long distances without making any adjustments. The Rimfire SR Reticle Scope is designed to be sighted in dead on at 50 yard and then drop compensation is already calibrated in and etched on the glass to allow you to be sighted in at 50, 75, 100, 125, 150, 175, and 200 yards! The .22 LR has always been one of the funnest guns to shoot and now thanks to the Hawke Vantage IR Rimfire scope it is now also one of my most versatile guns! 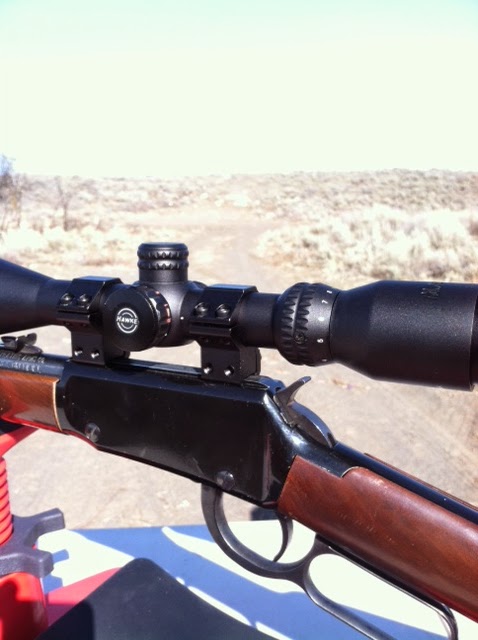 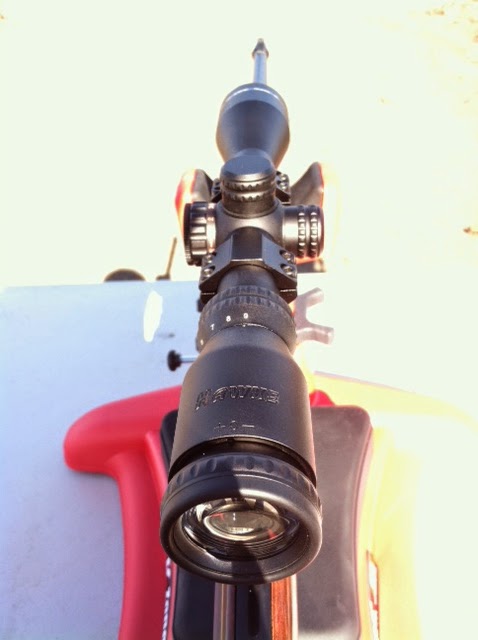 
I won't waste my time sharing with you the dimensions and specifications of the scope I will just put the link to their website where you can find and read them yourself and check out their other awesome products:  http://www.hawkeoptics.com/vantage-3-9x40-rimfire-22-high-velocity.html


What I will tell you about is my experience using the scope and my opinion on it:

First of all what I like about the scope is the price! Like I said I am not in the position right now to pay bunch of money for a varmint rifle and a scope to put on it.  For $179.00 this scope is an awesome deal especially considering the versatility it gives you with a gun you already have!

Secondly, the scope was simple and easy to use! The adjustments were super simple and clearly labled so that I knew every click adjusted the shot 1/4th of an inch at 50 yards.  The adjustments felt durable and were easy to use with my fingers.  I used a shooting sled to help me hold still while sighting in the scope and with the these adjustments I was sighted in dead on at 50 yards within 5 shots (not bad considering I almost missed the cardboard box my target was taped on with my first shot).  The scope has the aiming crosses etched into the glass along with the yardage so you don't have to memorize yardages, and the aiming crosses can also be illuminated by red or green to match your lighting while shooting! The eye relive can also be adjusted to make everything just right for how you want it!

Thirdly, this scope was accurate! I honestly didn't think I would be as accurate as I was just by sighting in at 50 yards.  It is almost to good to be true!  I thought I would sight in at 50 and then be somewhat close to my target at 100+ yards, but honestly I was able to hit Mt. Dew cans from 50 all the way out to 200 yards without any adjustments! This scope was awesome! When I have shot a varmint rifle, what makes it fun is being able to shoot such a small target at further distances and this is exactly how I felt shooting Mt. Dew cans at 200 yards!  I will note that out at 200 yards, my bullet had enough force to puncture the can but it did not pass through it.  This is just a general note so that someone doesn't think it is a good idea to try and shoot a coyote or something at those distances (you're all grown ups you can do what you want).


Lastly, the scope was fun! As much as I enjoy shooting guns I will admit that I don't get out my .22 as much as I used to because I was a little bored shooting it... I knew what it could do and I would get it out now and then just to mess around.  Now the Hawke Vantage IR brings my little .22 into a whole new view!  Finding .22 ammo may still be an issue for some, but when you are able to find it in bulk it is a good feeling to have 525 rounds in a box and know that you can fling a few rounds down range to 200 yards! This scope has helped me appreciate the sport of shooting just a little more than what I already do! This scope has taken such a traditional gun and innovated it into something new and exciting every shooter can enjoy!
I have a friend who competitively shoots at long distance competitions tell me that shooting a .22 LR at 200 yards is like shooting a .223 at 800 yards when you consider the drop compensation and how much wind is a factor... So even though it took me two shots to hit the Mt. Dew can at 200 yards I'm still pretty impressed.

I encourage you all to check out Hawke Optics and give them a shot! If you have a .22 LR you seriously need to give this scope a try.  Hawke also has scopes for every rifle you own including your AR, deer rifle, varmint rifle, shot gun/slug gun, cross bow, and pistol!  They also have a huge selection of spotting scopes and all of their products have amazing warranties and their prices are simple the best around for the quality you get!
Posted by Idaho Pursuit at 6:46 PM