This last weekend there was a 3D archery shoot in my area where a lot of avid archers were able to get out and fling a few arrows!  This is always a great time to get out and spend time with family, friends, or just to get away and out of the every day routine.  I am a huge fan of these shoots and feel they are extremely important to make part of your off season training program for many reasons.  Today I'm not going to be talking about the reasons I feel you should go to the 3D archery shoots but instead, talk about a principal I feel is much more important to remember when attending these shoots.
Usually when I attend these shoots I am with a group of family and friends who enjoy getting out and trying not to lose to many arrows.  In my group we usually have a person or two who does not hunt nor has had much experience with archery other than attending the shoots we bring them to.  I always love the fact that we are able to share this sport with people who aren't necessarily avid hunters or outdoors men/women, yet fail to remember to teach some of the important lessons I was taught as a kid from my dad.  The following are the main points to remember when attending 3D shoots no matter what level of archer you are:
Clear Shooting Lanes: This is my main focus of this post.  I can't tell you how many times I have been at an archery shoot with experienced archers as well as beginners and I hear the statement, "I can't even see the target" or "How in the world am I supposed to shoot that".  While I usually laugh at my dad trying to stand on top of logs to attempt to see over the brush enough to shoot the target I caught myself wondering this last time if the less experienced archery would think it is okay and ethical to attempt a shot under these conditions.  As much as I enjoy the challenge and the dynamics of many of these shots, I will admit that if it was me and a real animal in the wild I wouldn't take the shot in fear that I would wound the animal with a poor shot.  This leads me to my next point...
Shot Placement:  Another point I caught myself considering while at these shoots was shot placement.  Most of these 3D archery targets have vitals printed on them or circles indicating where a "proper" arrow placement should be.  While this is true if the target is standing broadside, many of the shots at these 3D archery shoots have the targets standing at an angle.  As we archers know, if an animal is presenting itself at an angle, the shot placement is going to be different according to how the animal is standing/bedding.  It is important to point out to the archers just beginning that just because the vitals are printed on the target where they are, doesn't mean that is exactly where your shot placement needs to be. 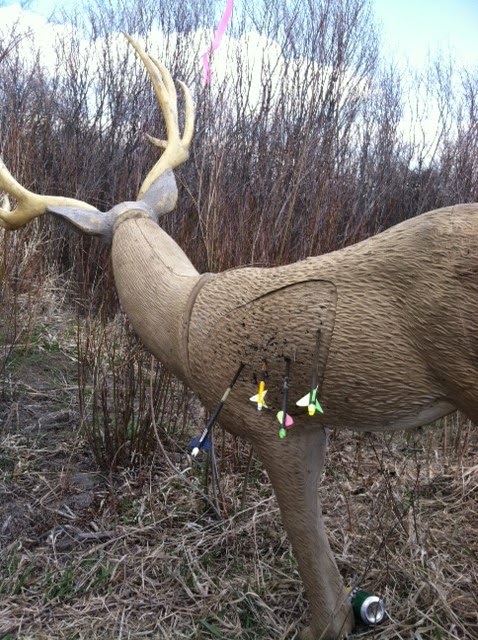 Distance:  The past point I wanted to discuss about 3D archery shoots is the principle of distance... I know this can be a controversial topic and I do not want to get into specifics about what is ethical and what is not because I am very aware that what is ethical to some hunters may not be considered ethical to others.  At the shoot this past weekend there were plenty of shots on animals well over 60 yards.  The furthest target on this weekend's shoot ranged in at 107 yards.  When we reached his target we were excited for the challenge and all flung arrows in hopes that we wouldn't be spending the next 20 minutes looking for lost arrows.  Between the steady cross-wind and other factors, our group happened to place 2 arrows in the target (one in the gut and the other in the bottom of its leg) while the other archers completely missed.  I am not going to be the one telling you that you should or shouldn't take a shot at a certain distance on a live animal, but I will be the one to say that it is important to never shoot at an animal beyond your level of ability.  It is also important to remember that at short distances factors such as the wind may not effect the flight of your arrow as much as it will at longer distances.  There are many factors to consider when talking about shooting at further distances but I will leave it at this for now.
In essence, 3D archery shoots are a lot of fun and a great challenge but it is important to remember that these shoots are for the purpose of entertainment and sport.  Some of the shots at these shoots may not be the most ethical or responsible when it comes to a live situation with a living animal so it is important to separate 3D archery shoots from real life hunting and know that when it comes down to ethics or entertainment, entertainment may trump at an archery shoot while ethics should always trump when in the field!

Posted by Idaho Pursuit at 8:40 AM