I recently received the Teton Sports Summit 1500 backpack for a review.  When I first opened the package I was a little concerned with how small the pack looked to be honest.  The pack only weighs in at 2.4 pounds, which may have added to my mind thinking the pack was so small.  The pack was light, yet it had a sturdy internal frame which gave the pack great structure.  Before I went any further, I got online to read a few reviews on the same pack to see what others thought about it.  I noticed that I was not the only one with a concern about the size of the pack.  A few people who reviewed the pack noted that they ended up passing it onto a younger family member or friend rather than using the pack themselves.  After doing my own review on the pack, all I have to say is that those other individuals may want to consider getting that pack back from whoever they gave it to!

For part of my review, my wife and I were able to get an awesome deal on renting two snowmobiles from Island Park Adventures, which is only about 40 minutes from where we live.  My wife had played around on a snowmobile a few times growing up but had never really gone on a snowmobile ride.  Even though a snowmobile trip wasn't what I would normally use a pack like the Summit 1500 for, I decided I would take it along on the trip to see how I liked it.  The night before the ride, I loaded it up with the following:


I didn't really need all of that gear for this trip but I wanted to make sure I packed the Summit 1500 the same way I would (or close to it) as if I was going on a hike.  Another disclaimer is that I was not only packing all of this stuff for me; my wife didn't want to have a backpack on during our trip so I got to carry what she wanted as well.  This helped me cope with my doubt that the pack was too small.  I filled my pack with this gear in no certain order or fashion and it all fit with ease in the main compartment.  I even had some room to spare and hadn't even filled the pockets on the side or the hood of the pack.  The pack has six different pockets and two pouches, as well as multiple straps and loops which can be used to attach and secure gear. 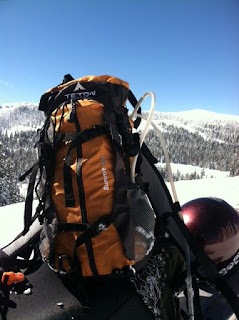 For those of you who may not know much about snowmobiling, riding a snowmobile for a whole day is quite a work out.  The ride is usually always bumpy and is full of ups, downs, and lots of leaning to one side or another.  I figured if this pack could stay on without sliding all over my back while I was attempting to toss a snowmobile around in the powder of the Rocky Mountains, then the pack would be fit for a good hike or two.  My wife and I started our ride around 8:30 am and took off to a scenic byway called Big Springs.  Later on, we decided to take off on a long ride to the top of a local mountain called Two Top. 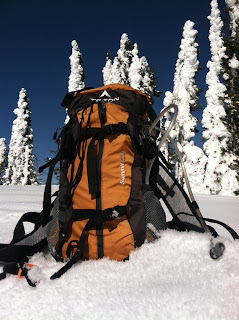 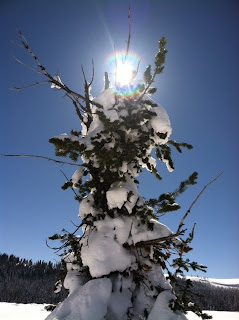 All together, my wife and I rode around for close to eight hours.  We saw lots of great scenic views and had a wonderful time together.  The only time the Summit 1500 ever got in the way was when my wife got her snowmobile stuck and I had to get her out of a four foot snow pit she dug.  Even then, the only reason I realized I had the pack on was because I was rolling around in chest deep snow trying to dig out a thousand pound machine.


What I liked about the pack was that it fit very securely to my body and it did not bounce around no matter what terrain I was on.  I did adjust the pack a few times to get it just right.  I had a little bit of a difficulty centering the pack to where the load was mostly on my waist instead of my shoulders.  The pack is only 22.5 inches long which was a little short for my torso.  If I adjusted it all the way to carry the load on my hips, then the pack would pull away from my shoulders because of the slack in the shoulder straps.  Once I played around with it for a while I found a happy medium for the load I was carrying that was just right for me. 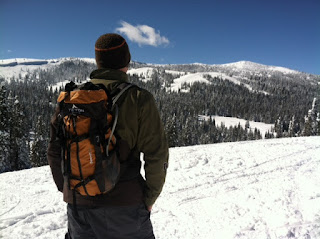 The pack does have two adjustment straps which I thought helped tremendously when I was trying to get the right fit.  The first strap is from the top of the shoulder strap and attaches to the top end of the pack itself.  You can adjust this strap to take out any slack from lengthening your shoulder straps.


The second adjustment strap is on the waist belt which cinches the pack securely to your waist strap.  This also helps the pack from bouncing around or tipping from one side or the other.  These are only a few of the features I quickly learned to appreciate about this pack.  I also enjoyed the double draw string enclosures to the main compartment which allowed me to expand my load capacity as well as ensure my gear was secure in my pack.  Another feature I liked was how the hood fit around the top of the pack with two heavy duty clips and an elastic bungee sewn in the hood to create a snug tight fit.  I never had to worry about snow getting down into my gear or anything randomly falling out of my back while I was jumping or climbing my snowmobile up the side of the mountain.


I wanted to make sure that this pack was not only good for snowmobiling, but also other activities. Because of this, I also took it on a quick snowshoe trip to hunt coyotes.  I loaded the pack similarly, with less food and more hunting supplies and adventured out on a quick trip.  Overall, during this hunt, I enjoyed how comfortable the pack was and how well I could adjust the pack for the different load I was carrying.  I was unlucky on the coyote hunt but I was just as happy, if not more so, with the pack on my second small adventure as I was on my first adventure.

The description of this pack says that it is great for an overnight or full-day trip.  I would completely agree that it is a great day pack and that it would be able to meet all of your expectations for this type of outing.  I, myself, would have a hard time trying to use this pack on an overnight trip.  If I was just hiking, and that is it, I may be able to make this work. Most of my over-night trips involve me packing in hunting and or fishing equipment on top of all my hiking gear.  For an overnight trip, I would probably consider Teton Sports' Summit 2800 or their Hiker 3700.  My overnight gear is a little large to fit onto or into the Summit 1500 but I could see if you used Teton Sports' over night gear, this would definitely be a possibility.

In conclusion, I would highly recommend the Summit 1500 to anyone interested in a great day pack and a possible one-night adventure pack.  I feel with the different straps and loops on this pack you would be able to fit the gear you needed for either one of these type of trips. You can pick up this pack on Amazon and Sportsman's Warehouse for under $60 bucks or you may be lucky enough to win one here on my blog! Teton Sports is confident enough that you will like the pack that they have decided to offer this pack to a lucky winner by following the instructions on RaffleCopter below! (Please note that this contest is limited to the lower 48 states)


If you are ever in the Island Park area and want to rent some snowmobiles or any other type of toy be sure to give Island Park Adventures a call and see what they have to offer!

Disclaimer:
As with all reviews on Idaho Pursuit, the following review is my honest opinion. I received the Teton Sports Summit 1500 free of charge and agreed to provide a review in exchange. I am not sponsored by or associated with Teton Sports and am not accepting any  compensation, monetary or otherwise, in exchange for this review.  My independent status may change in the future but, as of the date of publication, no relationship other than described above has been pursued or established.
Posted by Idaho Pursuit at 6:49 PM