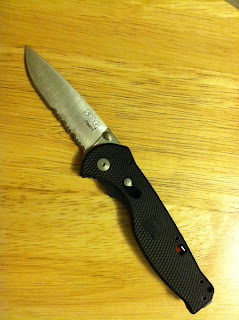 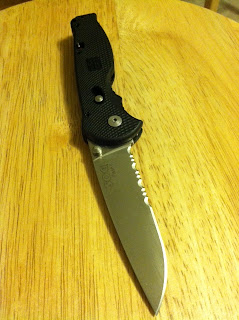 I recently received a new knife from Buck Stone Creek (where you can get this knife for about 50% off) and have been impressed with it enough that I decided to write up a quick review on it.  The knife is the SOG FSA-98 Flash 2.  Know if the name alone doesn't impress you enough just wait to hear what I have to say about the knife!  When I first opened the box and held the knife in my hand I was thinking it was a little bit smaller than I expected.  I pushed the blade up to open the knife and the blade sprung open with ease and locked in place.  When I say the blade sprung open I am not exaggerating.  This knife is designed to open fast and easy with very little effort.  I only had to open the blade less than 1/8th of the way open and the design of the knife did the rest.  This feature is a little hard to give justice through words so check out the video below to see how fast this blade opens!


Because the blade opens so fast, I like how SOG makes their knives as safe as they can by including a Piston lock system which locks the blade closed to help prevent accidental openings.  The lock is super smooth and easy to operate by flipping it up to lock it and down to unlock the blade.  When the lock is in place you can tug all you want and there is no way that blade is going to be opening.  I like this feature especially seems how I spend a lot of time with my younger relatives in the outdoors.


The blade on this knife is a heat treated, 3.5 inch, 1/2 serrated blade which is as sharp as they come.  I used this knife when I was fishing the fillet a trout I caught.  The knife wasn't as flexible as a fillet knife of course, but it cut with ease through the skin and bones of the two trout I caught.


The last thing I will say about the knife will be my first thought I had when I got it out of the box.  I initially thought it was smaller than I had thought, but that was because this knife is to be a low profile, discrete carry knife.  The handle is designed perfectly for my hand yet is slim enough that I hardly feel it in my pocket while carrying it.  The clip is specially designed to carry the knife low in your pocket, also to keep it discrete and concealed.  This is a great feature for a knife with an 8" overall length when open!  For more details on this knife SOG provided these specs:


Disclaimer:
As with all reviews on Idaho Pursuit, the following review is my honest opinion. I am not sponsored by or associated with SOG and am not accepting any compensation, monetary or otherwise, in exchange for this review.  My independent status may change in the future but, as of the date of publication, no relationship other than described above has been pursued or established.

Posted by Idaho Pursuit at 9:16 PM