A Day To Remember

As I have mentioned, the only thing I enjoy more than spending time outdoors is spending time with my family.  I absolutely love my wife and three month old daughter.  As passionate as I am about the outdoors, my wife knows my whole heart is with her and my daughter.  So this last Thursday, my goal was to take my wife hunting while she was on a two week break from work.  My wife has turned out to be quite the outdoors woman, she has out done me every hunting season we have been together.

My one goal with this hunt was to get our baby dropped off with the baby sitter and get my wife and I in our stands by first light... (Anyone who has had a three month old may have just laughed when you read that...) Needless to say, we were cutting it pretty close due to dirty diapers and loading up all the baby and hunting gear.  Just for good luck, we dressed my daughter in her favorite Button Buck outfit. 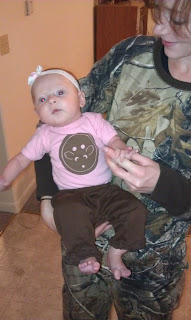 My wife and I both knew that we had to hurry to our stands once we arrived to our hunting area.  My wife, being a school teacher and new mom, was determined that today was the day she was going to get a deer because she really didn't have time to come out much more if she didn't get one... We talked on the hike into our stands about whether or not she would shoot a doe or wait to see if a buck came under her stand.  We determined that she had never shot a buck with her bow so she would love to shoot a buck, but if a good healthy doe was standing under her stand then she would get it.  I, being the gentleman that I am, walked my wife to her stand and waited until she was up in the tree and all set before I walked to mine.  It took me about 20 minutes for me to get into my stand because I was going super slow and trying to be as quiet as possible because it was slowly becoming light enough to see.  As soon as I got into my stand and all set up I checked my phone and I had a text message from my wife which said that there was a small buck in the clearing by her stand but that it had gone back into the trees.  I told her to stay still and that if she was lucky he would come back out... Sure enough, my wife has all the luck because shortly after I sent this text I got a phone call from my wife telling me that she shot a little two point white tail! She was super excited and I could hear in her voice how happy she was that she had taken her first buck with her bow.  My wife told me that she wasn't super sure about the shot placement, but knew that she hit him pretty good.  She told me, if for some reason he comes toward you, get another arrow in him to slow him down.

I can't tell you how proud I am/was of my wife.  I was sitting in my stand all smiles about how my wife had just got a small two point buck when I looked up and saw a little two point walking through the trees.  It stopped in a little opening just wide enough that I could see it had exactly the same size/description of horns my wife was talking about.  I thought to myself, "man if that buck gets away injured my wife is going to feel horrible".  I decided that I would try to squeeze an arrow through the trees and at least slow it down so that my wife could finish it off.  I pulled back and waited for a decent shot.  The deer took one step forward and gave me a chance to let my arrow fly.  Sure enough the arrow hit the deer behind the shoulder but a little higher than I had wanted.  I watched it run off about 15 yards and fall over kicking! My shot had gotten it right in the lungs and done its job.


I called my wife to tell her how her deer had made it over to my stand and that I had "slowed it down" for her.  By this point I had gotten out of my tree and wandered over to the deer I had seen drop, but noticed that it had only had one arrow wound.  I called my wife and asked her if she was sure that she had hit her deer... This is the reply that I got...
I kinda chuckled and told her that we may have shot two different deer.  I went over to her stand and helped her track her deer.  My wife took the lead and followed the blood trail until we got near a slough the deer often cross.  I told her that we would have to walk around to a fallen tree in order to cross and pick up the blood trail on the other side.  She sat there for a while and pointed out that her deer didn't make it across the slough, but had died right in the middle of it! My wife was super excited to see that she had made a good shot on her deer and that she had taken her first buck with her bow! 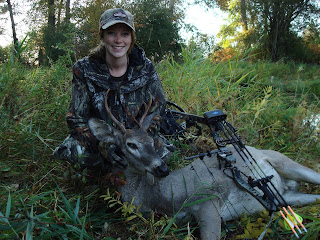 So we both ended up filling out buck tags for the year in one day.  I had a few mixed feelings about taking a small two point buck, but even though this may be one of smallest bucks I've ever taken it was by far one of the best!  It reiterated the point to me that a trophy does not have to be a wall hanger or some majestic animal, but more of the story behind the picture and who you share it with.  This was one of my proudest days as a hunter knowing that my wife and I had put in the time and effort through the off season to get our stands and ourselves ready for this hunt and both tag out on the same day!  It wouldn't have mattered if it was a little two point, a doe, or some great big monster buck, I enjoyed every second of this hunt because I was with my wife every step of the way! Great day, and great memories!

Posted by Idaho Pursuit at 6:53 PM